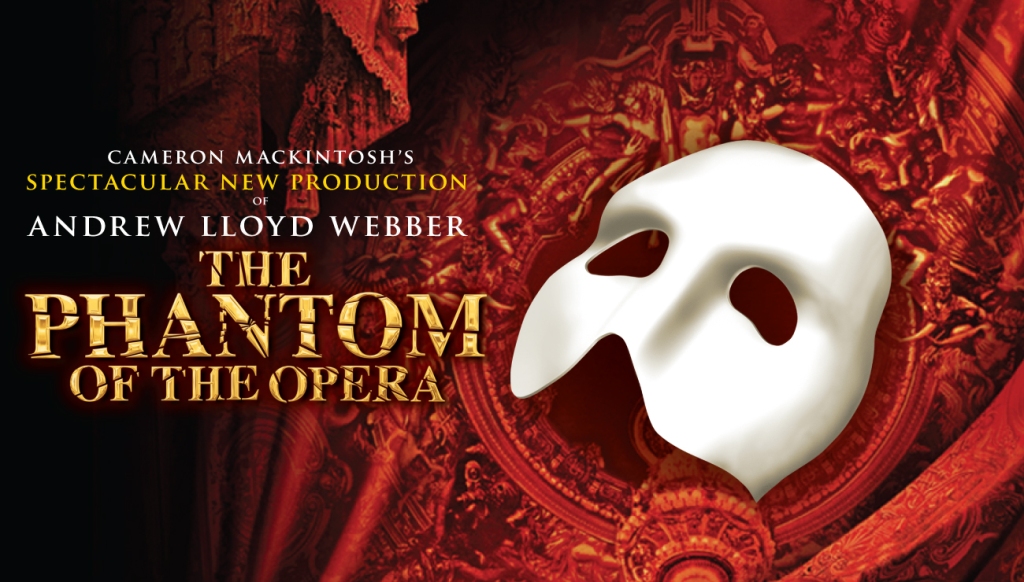 (Cincinnati)
Cameron Mackintosh’s spectacular new production of Andrew Lloyd Webber’s THE PHANTOM OF THE OPERA will make its highly anticipated return to Cincinnati at the Aronoff Center for 2 weeks, November 15 – 27, 2016 as part of Fifth Third Bank Broadway in Cincinnati’s 16/17 Season presented by TriHealth. With newly reinvented staging and stunning scenic design, this new version of PHANTOM is performed by a cast and orchestra of 52, making this one of the largest productions on tour in North America. Tickets are available at the Aronoff Center Box Office downtown at 650 Walnut Street, online at CincinnatiArts.org or by phone at 513.621.ARTS. Ticket prices start at $44. For more information on the production and a video sneak peek, please visit http://www.ThePhantomOfTheOpera.com/ustour/

Andrew Lloyd Webber said, “Having received great critical acclaim in the UK, I am really pleased that Laurence Connor’s new production of PHANTOM is to tour the US again, which will play in tandem with the Broadway production which has recently celebrated 28 years.” Cameron Mackintosh said, “I’m delighted that my new production of PHANTOM has proved to be as spectacular a success as the brilliant original which is still the reigning champion as the longest-running production on Broadway after 28 phenomenal years. This exciting new staging, retaining Maria Björnson’s amazing costumes with a terrific new cast is thrilling audiences and critics alike and gaining a whole new generation of fans eager to see this version again and again. This new production of PHANTOM has now been seen by over 2 million people across North America since it opened in November 2013 and continues to take the music of the night to dazzling new heights.”

Cameron Mackintosh’s spectacular new production of Andrew Lloyd Webber’s THE PHANTOM OF THE OPERA is presented by Cameron Mackintosh, The Really Useful Group, and NETworks Presentations. Directed by Laurence Connor (who co-directed the new production of Les Misérables currently running on Broadway and around the world, the award-winning new West End production of Miss Saigon coming to Broadway in 2017 and national tour in 2018, and, most recently, the stage version of the movie School of Rock now playing at Broadway’s Winter Garden Theatre and nominated for 4 Tony Awards including Best Musical), with choreography by Scott Ambler, set design by Paul Brown, Tony Award®-winning original costume design by Maria Björnson, lighting design by Tony Award®-winner Paule Constable, sound design by Mick Potter, and musical supervision by John Rigby. The production is overseen by Matthew Bourne and Cameron Mackintosh. THE PHANTOM OF THE OPERA: music by Andrew Lloyd Webber; lyrics by Charles Hart (with additional lyrics by Richard Stilgoe); book by Richard Stilgoe and Andrew Lloyd Webber; orchestrations by David Cullen and Andrew Lloyd Webber.

Based on the classic novel Le Fantôme de L’Opéra by Gaston Leroux, THE PHANTOM OF THE OPERA tells the story of a masked figure who lurks beneath the catacombs of the Paris Opera House, exercising a reign of terror over all who inhabit it. He falls madly in love with an innocent young soprano, Christine, and devotes himself to creating a new star by nurturing her extraordinary talents and by employing all of the devious methods at his command.

Cameron Mackintosh’s brilliant original production of Andrew Lloyd Webber’s THE PHANTOM OF THE OPERA continues performances at Her Majesty’s Theatre in London and in its recording-breaking run at the Majestic Theatre on Broadway and many other cities around the world.

THE PHANTOM OF THE OPERA will play the Aronoff Center from November 15 – 27, 2016: Tickets for THE PHANTOM OF THE OPERA start at $44. They are available at the Aronoff Center Box Office downtown at 650 Walnut Street, online at CincinnatiArts.org or by phone at 513.621.ARTS. For groups of 10 or more, contact the group sales department at 513.369.4363. Performance schedule, prices and cast are subject to change without notice. For more information, please visit http://www.BroadwayInCincinnati.com.