We’re talkin’ Rhubarb, here…known all over the US as “Pie Plant”.  I first tasted rhubarb when my daddy began growing it in our back yard for my mother to make pies.  He had grown up on Rhubarb Pie in Michigan and my mom had never heard of it!

Officially a vegetable, rhubarb has been treated as a fruit for centuries.  I find it to be a very interesting vegetable because of all of its contradictions:  used as a fruit but it’s a vegetable, its leaves are toxic (yes they will KILL you if you eat a bunch, or just make you really sick if you only eat one or two), and its root has been used medicinally for eons to cure several maladies, constipation for one! Chemicals in rhubarb have also been found to destroy leukemia cells and lung cancer cells.  Go figure!

Strawberry Rhubarb Pie comes to mind when rhubarb is brought up in conversation, but Lula has a base recipe for several lovely dishes using RASPBERRY Rhubarb.  Enjoy this pic of our Raspberry Rhubarb Fool!  You can ask for a derivation of this combination anytime from February thru July usually – or until we run out!! 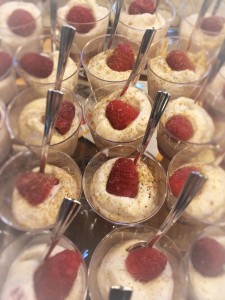