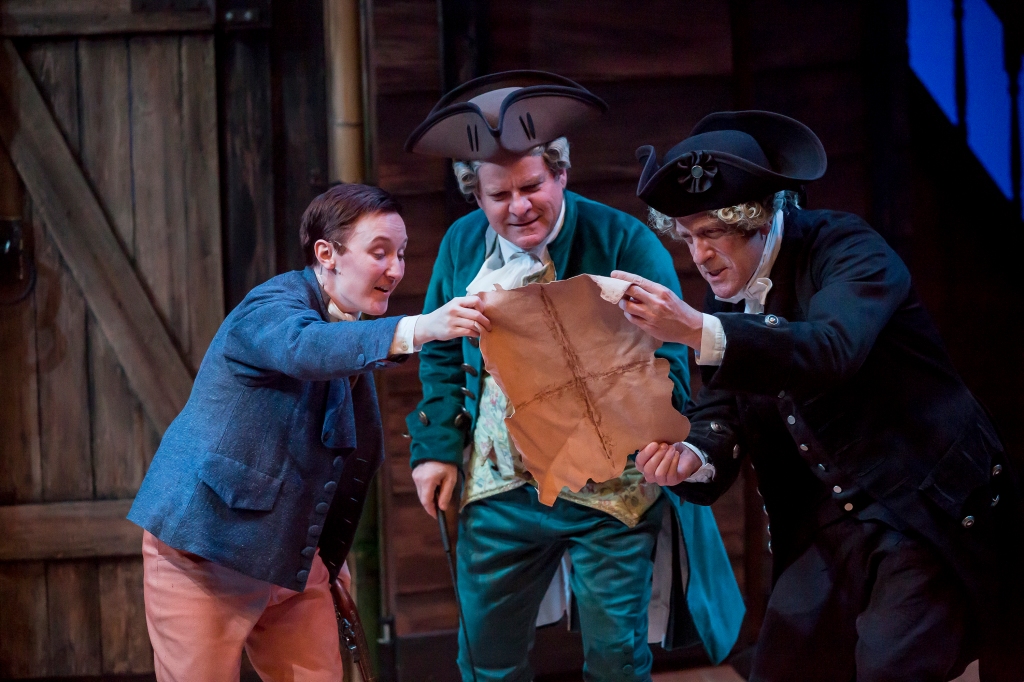 Rambunctious, mayhem, and laugh out loud comedy is what theatre-goers can expect from Cincinnati Playhouse’s Treasure Island. It will enlighten your childhood spirit, imagination and quest for adventure knowing that if you try hard enough all things are possible. This story will take you on a journey to wild and exotic lands in search of fortune. It will whisk you away to animated sword fights, battle cries, and untold treasures.

The story starts in a small inn as a pirate Billy Bones wonders in requesting a room and a drink. He is rude and temperamental to the innkeeper’s son Jim Hawkins. He was demanding rum and people to drink with him. Billy Bones has secrets ones that will cause former associates to want to kill him such as  Black Dog and Blind Pew and especially the one-legged pirate. He confides with Jim that he has a treasure map and wants Jim to come with him to retrieve the treasury, however, before that adventure happens Bill is murdered. Jim is now is in possession of the map and ready to explore. He finds a lively, loveable and intriguing group of cohorts including Dr. Livesey, Squire Trelawney, Captain Smollett and of course the mysterious Long John Silver that also seeks this adventure.

Kudos for performances must go to the following cast members for standing out.

Em Grosland he played Jim Hawkins perfectly and without reproach showing the excitement and drive of a young man.

Jeffrey M. Bender as Long John Silver he played craftily and with witty and character that drew you into the story.

This performance will run at The Cincinnati Playhouse until May 19, 2018; more information is available at http://www.cincyplay.com