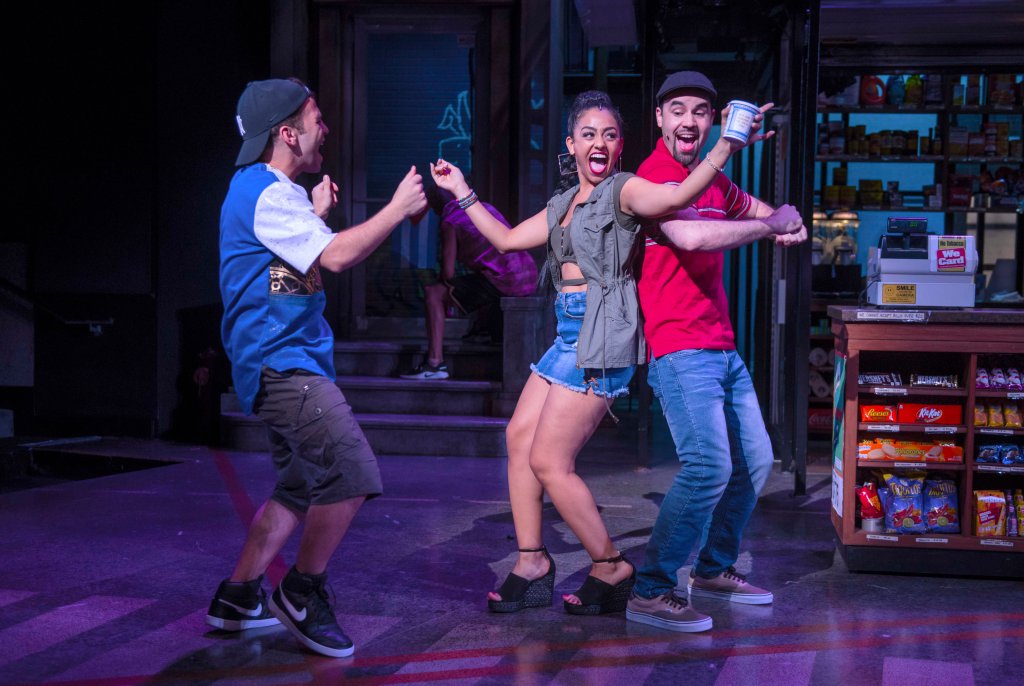 The Cincinnati Playhouse will captivate and enthrall your attention with, In The Heights, this hip hop high energy musical is the brainchild of Lin-Manuel Mirando best known for the Broadway hit Hamilton. This story also has achieved high merits on its own winning four Tony Awards 2007 in including Best Musical and Best Original Score. This production is timely, highly dramatic with characters that or lively, animated and real. They have dreams, aspirations, heartaches, sorrows and joyful glee making you feel so close to them that you could reach out and touch their lives.

The opening night was this past Thursday, January 24, and patrons showed an abundance of excitement as they entered the building for this production as they pushed past the frigidly cold and icy weather outside to wander into the warm and comforting Marx Theatre. One of the attendees stated that this was her first opening night show and she knew it was going to be great.

The story takes place in an inner-city Latino community everyone knows everyone, and are treated like one big family. Abuela Claudia is an older lady motherly figure in the neighborhood. Usnavi hardworking guy who owns a street store, he runs it with his lazy, but ambitious cousin Sonny. Usnavi has a has a huge crush on a young woman called Vanessa. She likes Usnavi but keeps him guessing. Vanessa is struggling to pay rent and bills, and that is taking a lot of her attention. She works for Daniela, the local hair stylist who knows the gossip. Then there is Nina young lady daughter of the Rosarios, Kenny and Camila. Nina made it big by being the first person from the neighborhood to go to college, needless to say, Stanford. She is going to be successful. However, Nina returns to the area after a tough time there, low grades resulted in her losing a scholarship now she has no money to go back. Benny who works for her parents the Rosarios at their car service business is delighted to see Nina back home and shows a keen interest in dating her or more. However, the Rosarios are against this relationship because Sonny is not Latino. The interplay among the characters situations creates saucy and an interesting tension which makes this production a winner.

High marks to the entire cast with special kudos to:

Ryan Alvarado as Usnavi who made this show lively, real and believable. He was also in Hamilton: An American Musical on it’s first Broadway Tour, he has had other roles in other productions of The Tempest, American Idiot, Henry V, and the Rocky Horror show.

In the Heights at the Cincinnati Playhouse is very entertaining and is a remarkable stage production. More information on this show is available at http://www.cincyplay.com