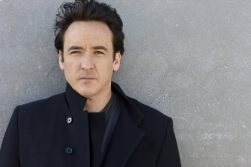 I recently got to have a friendly, delightful, and enlightening conversation with John Cusack. He is currently on tour to celebrate the 30th anniversary of the movie Say Anything. It is about the character of Lloyd Dobler and his quest to capture the heart of Diane Court, his first love. However, his journey runs into problems with Diane’s father who disapproves of Lloyd. The movie proves true love is not always a smooth path, but in the end, love conquers all.

The tour is taking place in old theatres throughout the country. The film is shown and then there is a conversation with John about the film and his career. John has done similar tours with some of his other notable movies such as Grosse Pointe Blank and High Fidelity.

I asked John about what inspired him to get involved in the movie-making business, both acting in and producing films. He stated that as he grew up in Chicago, and one thing he enjoyed was going to the number of different cinemas there. One week there might be a theatre that just did 60’s and 70’s movies, and another one might have only Japanese films or French and artsy productions. Also, in high school, a lot of the students were interested in making movies.

I asked John if he had a favorite movie or character that he liked over the years. He stated that pretty much the comedies were some of his favorites; however, he also likes the dramas because they were thought-provoking.

Regarding the current state of Hollywood movie-making business, John shared his concerns about movie factories. Large conglomerates make most of the films today they mass produce quantity rather than quality. The old days the production houses were run by families, and they were interested in and making unique and entertaining films. They would try out exciting things, take chances, maybe an incredible bar scene or something. Today, the production studios are risk aversive; they don’t take chances, especially if it makes someone uncomfortable. Commercialism and merchandising prevalent in the movie business.

Finally, I asked him about advice or words of wisdom for young creatives. He said if you are entering the movie business, you need not have expensive equipment today. iPhone can do an excellent job with the editing applications, so get out there do it yourself. You might have a problem with the distribution channels, but you can, with a little work, produce something remarkable.

More information on his Cincinnati tour can be found online at https://tafttheatre.org. It will be a satisfying an enjoyable experience and one not to miss.