Hurry, quick!  If you love Brussels Sprouts get them now before they leave the store.  In the US, fresh runs from about June to January.  But DID YOU KNOW…they get their name from where they were originally mass cultivate – Brussels Belgium?  They’ve been widely enjoyed since the 1500’s over there…but just in the 20th century did they gain in popularity in the US.  Mostly from California, you can get them frozen all year round, but fresh is best.

LOADED with good stuff our bodies need, BS (you know what that means right? and it’s so fitting since they can smell like a fart if you overcook them 🙂 ) are a super food.  Coming from the cruciferous veggie category, they contain the metals and micronutrients we need along with loads of Vitamins A, C, K, and B6, not to mention folic acid and fiber.

Lula’s BS recipes include but are not limited to Roasted (simple and our favorite),  Dijon Garlic, and a magnificent festive Fennel & Pomegranate Salad.  Relax…they won’t make YOU smell like a fart! 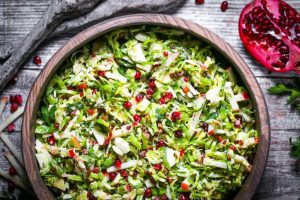