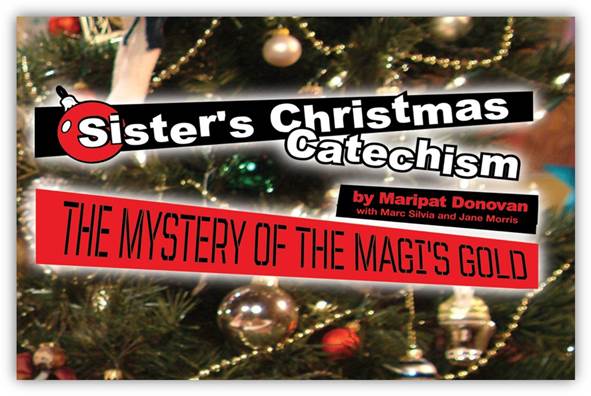 It’s “CSI: Bethlehem” in this holiday mystery extravaganza from the author of Late Nite Catechism, as Sister takes on the mystery that has intrigued historians throughout the ages – whatever happened to the Magi’s gold? (“We know that Mary used the frankincense and myrrh as a sort of potpourri – they were in a barn after all.”) Retelling the story of the nativity as only Sister can, this hilarious holiday production is bound to become a yearly classic. Employing her own scientific tools and assisted by a local choir as well as a gaggle of audience members, Sister creates a living nativity unlike any you’ve ever seen. With gifts galore and bundles of laughs, Sister’s Christmas Catechism is sure to become the newest addition to your holiday traditions.

ENTERTAINMENT EVENTS, INC. (Producer) is based in New York City.  EEI has made its mark on the theatrical touring industry by offering a variety of new and exciting plays and musicals to an ever-growing list of professional presenting organizations throughout the country. In addition, EEI has performed over 1,500 fundraising events for schools, church groups, and private parties. EEI brings all aspects of producing under one roof: sales, production, casting, creative, and technical. EEI productions have been produced and presented in all 50 states, as well as in Canada, Europe, Australia, and Asia. Since 1999, EEI has produced Late Nite Catechism: The Series, Maybe Baby, It’s You, The Yiddish Are Coming, The Yiddish Are Coming!, Shout! The Mod Musical, Tony N Tina’s Wedding, Defending the Caveman, We’re Still Hot! The Musical, and are former producers of Jeanie Linders’ Menopause The Musical. EEI is now proud to present Girls Night: The Musical, ‘Twas A Girls Night Before Christmas: The Musical, Dishing With the Divas, Help! My Husband Has Gone Missing: My Daughter is Getting Married & I Am Having Hot Flashes!, Panties In A Twist, Cuff Me: The Fifty Shades of Grey Musical Parody, Late Nite Catechism, Sister Strikes Again!: Late Nite Catechism 2, ’Til Death Do Us Part: Late Nite Catechism 3, Sister’s Christmas Catechism: The Mystery of the Magi’s Gold, Sister’s Easter Catechism: Will My Bunny Go To Heaven?, Late Nite Catechism Las Vegas: Sister Rolls the Dice!, Sister’s Summer School Catechism: God Never Takes a Vacation!, Sister’s Back to School Catechism: The Holy Ghost and Other Terrifying Tales!.