Downtown Cincinnati can often be a busy place, with lots to see and hear. Many locations downtown provide good opportunities to sit down, relax and take in the scenery or people watch. Fountain Square, of course, is the most popular one, with the beautiful fountain and people galore. The Banks is a new such place, with different businesses to enjoy, and the greenery around the P&G Offices and the grounds near Garfield Place provide other pleasant spots to sit for a moment.

My personal favorite, however, is Lytle Park. It is a peaceful, fairly quiet park, with nice scenery and comfortable seating, especially on a warm, sunny day.

The reason I like it so much, though, has little to do with the pleasant atmosphere and is largely, perhaps totally, due to the park’s most prominent feature – the nearly 100 year-old statue of Abraham Lincoln. 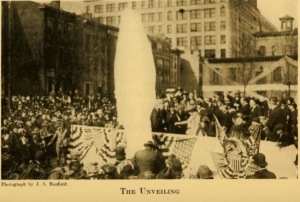 Dedicated in 1917, the statue is a tall, oversized representation of the pre-Presidential Lincoln. It depicts the un-bearded, small-town man standing on a tall base, hands across his stomach, looking west, parallel to Fourth Street.

The statue is large and imposing, but what impresses me most is not its size or physical characteristics, nor its representation of my favorite historical figure, but, instead, the fascinating background story of its creation and the controversy it stirred.

The story began around 1909, the centennial of Lincoln’s birth. Anniversaries are big events in American culture, and many cities throughout the nation wished to honor the martyred Great Emancipator.

Cincinnati was no different. Eleanora Alms, widow of Cincinnati businessman, Union Civil War veteran and Lincoln admirer Frederick Alms (namesake of Alms Park) decided to honor the ex-President and her husband with a statue of Lincoln. She formed a five-person Lincoln Memorial Committee to handle the project and she offered a commission of $100,000 for the statue.

Shortly afterwards, four of the committee members agreed to have noted sculptor George Grey Barnard design and sculpt the statue. This did not sit well with Mrs. Alms or the committee’s President, Harry Probasco. They preferred another famous artist, Gutzon Borglum (who years later would gain greater fame as the creator of the Mount Rushmore monument.) Mrs. Alms threatened to revoke her financial pledge, but another committee member, Charles Phelps Taft, brother of President William Howard Taft, agreed to pay the $100,000. The committee then proceeded without Mrs. Alms and had Barnard create his vision of Abraham Lincoln.

At around the same time as Cincinnati was dedicating this statue in a ceremony on March 31, 1917, featuring a speech by then former President Taft, the United States and England were discussing a commemoration of a century of peace since the end of the War of 1812 (ironically as another war was ravaging Europe.) The U.S. appointed a committee (some things never change) to handle this and one idea was to send a statue of perhaps the most famous American, Abraham Lincoln, to London as a gift. One thought was to create a copy of the Lincoln statue by Augustus Saint-Gaudens, but another suggestion was to send a copy of the Barnard statue. This latter idea caused a widespread ruckus in the political and art worlds.

Here the intersection between artistic interpretation and public memory clashed. Barnard did not recreate the popular image of the older Lincoln as President, with full beard and mature appearance. His vision was to make it as human as possible, using a younger Lincoln. One article quoted him: “I would not feel that his face could give its message if I had left out a single wrinkle of the network of lines, or even the wart on his left cheek.” A dedication booklet mentioned that he felt that an “imaginary Lincoln” would be “an insult to the American people, a thwarting of democracy” and believed that “the tool Lincoln and God made – Lincoln’s self – must be shown.”

Many people thought his work failed to represent the legendary leader accurately. Critics disliked the statue’s long neck, slouched shoulders and large hands and feet. Even Barnard’s decision to have Lincoln wearing shoes instead of boots was criticized as Robert Lincoln insisted his father only wore boots. Many considered the statue to be undignified.

Robert Lincoln, ever protective of his father’s image, was among those who fought against sending this sculpture to England. He called the thought of offering it as a gift “simply horrible,” and promised he was “doing everything possible” to stop it. He considered Barnard’s interpretation “a monstrous figure which is grotesque as a likeness of President Lincoln and defamatory as an image.”

Other descriptions of this monument included: “a mistake in bronze,” “revolting as a portrait,” “colossal clodhopper,” “a distressing statue,”and “misshapen, ugly, comic, cartoonist feet exhibiting plenty of sole, but no soul.” The Literary Digest noted that people did not expect the “stark realism” of the monument.

Judd Stewart, a collector of Lincoln-related items, wrote to a British official that the artist had depicted a man who was “a weakling with an immature body, with atrocious hands and feet, and with a face that…shows an almost painful expression of insipidity and weakness.” He felt that it would be “a lasting shame” to have it displayed in front of Parliament.

It gained the unflattering name of the “stomach ache statue” because of the placement of the ex-President’s hands, and some believed it was not “statesman-like” enough. Even a 2015 auction of a photograph of the statue described it as “sad, weary.”

The U.S. eventually sent a copy of Saint-Gaudens’ work to London.

Condemnation of Barnard’s finished statue was not unanimous, however, as some people believed he had accomplished his goal. John Stewart, supposedly the originator of the idea to send this statue to England, thought this work would “present a man and not an idealized effigy.”

Theodore Roosevelt also appreciated it: “At last we have the Lincoln of the Lincoln-Douglas debates…This statue is unique; I know of no other so full of life.”

Of Barnard, Roosevelt noted: “the greatest sculptor of our age…He has given us Lincoln, the Lincoln we know and love.”

William Howard Taft, in his dedication, said: “The sculptor…has with success caught in this countenance and this form the contrast between the pure soul and the commanding intellect of one who belongs to the ages.”

Others also approved of Barnard’s work. One Philadelphia newspaper, described it as “the people’s Lincoln and the people will know it as their own.”

The Cincinnati Enquirer printed a highly complimentary article, calling it “heroic,” and “an imposing and impressive work.” Later, the Enquirer reprinted a Washington Post article which quoted a sculptor as saying this statue was “eloquent of power, of will and dominance” and that it showed “the indomitable spirit and will of the Lincoln of history.”

Eventually, two more copies of Barnard’s statue were created. One was sent to the working-class city of Manchester, England, which had supported Lincoln’s administration during the Civil War, and the other to Louisville, Kentucky, not terribly far from his birthplace.

These controversies are examples of the fascination of history. When I sit in the park and gaze upon this statue, so large, so tall, with such immense features, I see much more than a work of art. I see this entire story, the planning and the conflicts, the criticism and the compliments, the concept and the finished product. It is much more than a simple tale of a wealthy family giving a gift to Cincinnati – it represents a discussion of public art, public memory and public history, the kind of discussion that still continues today, as the nation discusses a possible new World War I memorial or witnesses the controversies over the removal of monuments and symbols throughout the land. Who owns, creates or controls public memory?

It is this statue, this story, this history, these questions, that make Lytle Park my favorite downtown place to relax. 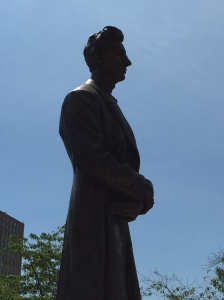