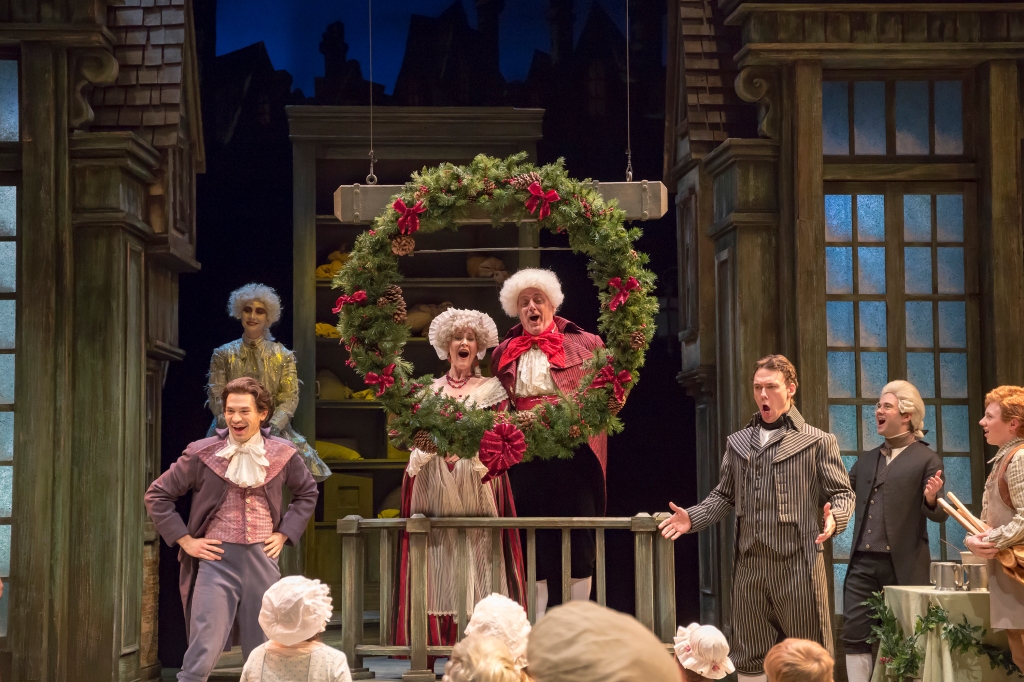 A Christmas Carol at the Cincinnati Playhouse in the Park is a Cincinnati tradition that brings the celebration of the season to our friends and neighbors in this greater community. The of Charles Dickens’ tale is now in its 27th season at the Playhouse has been performed nearly one thousand times there, with about twenty thousand annual visitors.

The show opened at the Robert S. Marx Theatre Friday night to an audience that was filled with gleeful excitement and high expectations that something amazing was about ready to happen and the audience couldn’t have been any more right as the actors and actresses along with the special effects and the atmosphere of the theatre did just that. This presentation is a soulful delight that is cheerful, full of magic and wonder, it was powerful, commanding, and heartwarming.

Ebenezer Scrooge a lost soul of sorts that found redemption from life’s loneliness, tragic happenings, and bitterness that had captured his essence. Ebenezer in one night with the warning of his deceased business partner and the visitations of three spirits of Christmas past, present, and future has an epiphany. His paradigm on life switched from selfishness and judgment of his fellow man to one of openness, hope, charity, and kindness.

The script and the quality of all the talented performers brought a juicy and rich flavor to this stage production.

Bruce Cromer has performed the role of Ebenezer Scrooge for thirteen seasons now and has done so with the skill of a true artisan, exceptionally talented. He is both commanding and powerful at times and then switches to festive, joyful, and merry. He displays the bitter Scrooge gracefully with the commanding aspects with such as with one quote of the character, “A poor excuse for picking a man’s pocket every 25th of December”.

Greg Procaccino as Jacob Marley hit above the mark as Ebenezer’s business associate. You could feel the evil and greed pouring out of the persona when he was convincing Scrooge to join him in his venture, and the remorse in his warning to Scrooge in a quote, “Mankind was my business”.

Ryan Wesley Gilreath as Bob Cratchit is brilliant as he displays the abused clerk and loving father. He skilling in showing the character traits perfectly as the fun, hardworking and uplifting nature.

Mr. Fezziwig and Mrs. Fezziwig are played by Douglas Rees and Annie Fitzpatrick. The characters are amusing, entertaining and enjoyable. They play them superbly and impressively.

Kelly Mengelkoch is Mrs. Cratchit splendidly shows all the shades of her character whether the playfulness, caring or stern qualities.

Attendee to this holiday special presentation will leave with a feeling of being entertained as well as encourage that there is still hope for all of us. More information is available at http://www.cincyplay.com