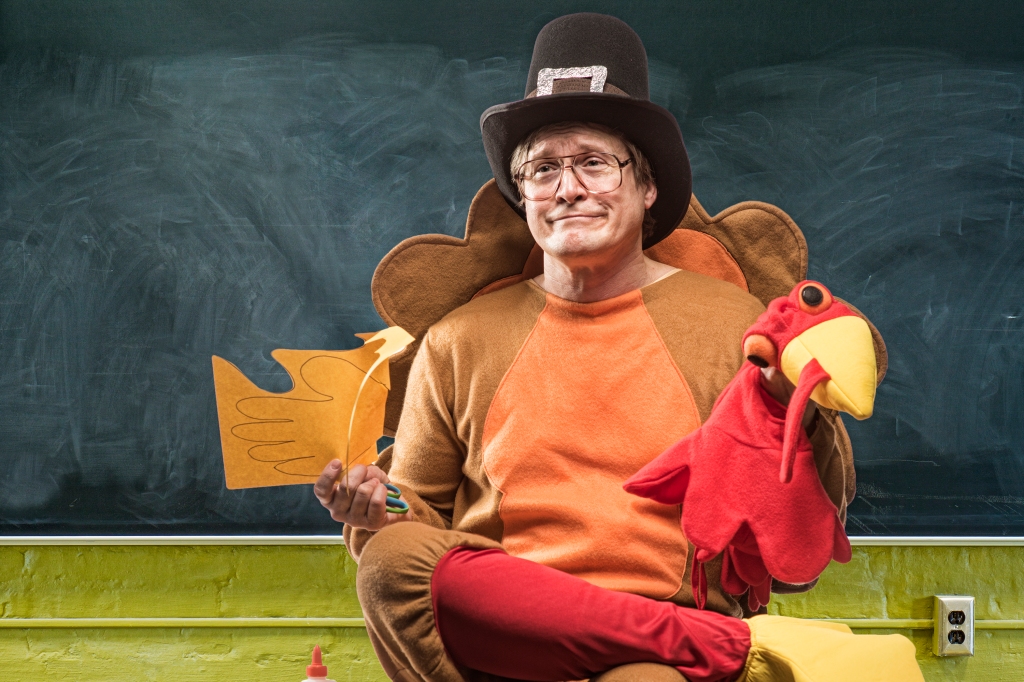 Thanksgiving is usually a time of celebration, joy, relaxation, a time to spend with family and friends and eating food, watch football and parades and have light-hearted fun. However, these festivities are forgotten as three do-gooders go astray on a path to create a politically correct Thanksgiving play. They are creating play is for third graders and the story must be truthful and accurate of the first Thanksgiving while celebrating Native American Heritage Month. The dark moments in history are overemphasized in a peculiar and bizarre fashion which leads to weird, zany, and humorous moments in The Cincinnati Playhouse’s production of the Thanksgiving Play by Larissa Fasthorse.

The characters in the story are delightful and interesting.

Logan the uptight dictator-like drama teacher is played by Jennifer Bareilles. Jennifer skillfully shows the neurotic tendencies of the character making her believable and real. The character switches from being nice to mean, controlling, and threatening in a split second letting them know she is in charge. She demeans their ideas but wanting their input.

Alicia the shallow and dim-witted actress is played by Ashley Austin Morris. She is superb and brilliant playfully interacting with co-performers. I like how her character confounds Logan with lines that she doesn’t want to write but only wants to be an actress. She is good at getting attention and gets paid well for that. Ashley has had notable roles Murphy Brown, The Good Wife, The Big Bang Theory and Desperate Housewives.

Jaxton is a fun character who is a street performer, yoga guru, and vegan and minion of Logan. The character is played by Scott Parkinson. He was very humorous as Jaxton in the skit with Caden and Alicia in the Viking like battle l scene creating mayhem. Scott has been in roles on Broadway on Coast of Utopia and The 39 Steps.

Caden the frustrated nerdy history teacher and aspiring playwright who odd wanting the play’s beginning about the first Thanksgiving with notable events that occurred thousands of years earlier. Nat Dewolf hits this role above the mark and makes it work.

The story is kind of like a Seinfeld episode with outrageous skits and dialogue and worth the viewing. More information is available at Cincyplays.com